With the announcement of the TN Reconnect, many adults are realizing their dream of attaining a college certificate or degree can become a reality. With the initiative, most of these adults are enrolling in Tennessee colleges for opportunities to advance their careers. Dyersburg State Community College offers various career technical and certificate programs that draw many of the TN Reconnect-approved local students. 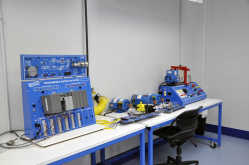 DSCC offers CTEs (Career Technical Educations), which includes Certified Production Technician Certificate. According to DSCC President Dr. Karen Bowyer, the Certified Production Technician in an “industry standard” and added there are current students who are working 3 days a week at Marvin Windows and Ermco, while spending 2 days per week on campus attending classes.

“We call those stackable certificates,” said Dr. Bowyer. “In 12 hours, you can earn a certificate, which is a national certificate from the Manufacturing Skills Standards Council, so it is recognized nationwide. It’s good, basic knowledge of safety and quality control. If they get all four of those certificates that will probably take them to some 40 hours.”

Students can also obtain the Engineering Systems Technology Associate of Applied Science Degree by completing the criteria to earn the four aforementioned certificates with the addition of completing courses for general education. In all, the degree can be earned after completing 63-65 credit hours.

For students who would like to obtain further info on TN Reconnect or the courses offered at DSCC, those interested can visit the school’s One Stop where DSCC staff members are ready to help (above). The One Stop is located inside the Student Center building (below).

Students working toward their Engineering Technology Associate Degree are instructed by Charles Norsworthy.

“The Applied Science Degrees are there to prepare people to go to work,” said Dr. Bowyer.

Many area adults are taking advantage of the technical courses at DSCC. Aiding in their efforts of achieving a certificate or degree is the TN Reconnect. The TN Reconnect is an initiative of the statewide Drive to 55 Campaign — to have 55 percent of Tennesseans equipped with a college degree or certificate by 2025. TN Reconnect focuses on helping adults 24 and older enter postsecondary education to gain new skills, advance in the workplace, and fulfill lifelong dreams of completing a degree, credential, or certificate. It provides students with a last-dollar scholarship, allowing them to attend Tennessee colleges, including DSCC, tuition free. TN Reconnect pays the remaining balance of tuition after other state and Pell grants have been applied.

According to Dr. Bowyer, each institution is required to have a TN Reconnect Adult Student Coordinator on site. At the DSCC main campus, the role is occupied by Rebecca Reeves. Reeves became part of the DSCC staff in October 2017.

“She [Reeves] has worked really hard to get people involved,” added Bowyer.

As of April 2018, with the aid of Reeves, 454 area residents have applied and been deemed eligible for TN Reconnect, starting fall 2018 at DSCC.

Eligibility requirements for students applying for TN Reconnect include:

“Twenty-four and older, married, if they have dependents, or have served in the military,” added Reeves. “So, we do have some students under 24 who meet that criteria and are considered independent.

“One big thing about TN Reconnect is that there are no income guidelines,” continued Reeves. “A lot of adults are curious about that because with federal Pell grants, they do look at income, but TN Reconnect does not. They are not looking at what someone makes annually. Essentially anyone that meets those requirements could come back and go to school.”

Reeves also noted potential students who are interested in applying for TN Reconnect can visit the college’s Student One Stop inside the Student Center building where they can receive help in applying for Reconnect, courses at DSCC, the FAFSA, and to have any questions they may have answered.

While many TN Reconnect adults are interested in the technical courses, Reeves noted others also choose to take courses in healthcare, including the LPN to RN Fast Track program, medical coding, and health sciences.

As for the future plans for the technical courses at DSCC, Dr. Bowyer stated, “We do have robotics equipment, and we haven’t really done much with robotics, so we’re going to be doing more of that. There’s a need for that. We have a 3D printer, and we haven’t done a lot with the printer either, so we are looking more into that.

“We have a list of 8,000-plus people that live in this area that have got some college work, but they have never finished a degree,” said Dr. Bowyer. “We’re communicating with all of them to let them know about Reconnect. They are discovering every day that this opportunity is here.”

For additional information on courses or TN Reconnect, individuals may visit the Student One Stop inside the Student Center building on the DSCC Main Campus in Dyersburg, or contact Rebecca Reeves at 731-288-7514 or reeves@dscc.edu.