By Sam Stockard, The Nashville Ledger

With more than 50,000 high school seniors applying for free community college tuition and fees through Gov. Bill Haslam’s Tennessee Promise, it’s reasonable to wonder if Tennessee’s community colleges have the infrastructure – including classroom space and instructors – to handle such an influx of new students.

And what about the state’s four-year schools? Will the offer of free community college erode already-declining enrollment numbers?

Tennessee Promise Executive Director Mike Krause discounts such concerns, largely, he says, because he expects only about 12,000 of those 50,000 students will actually take advantage of the plan.

Elsewhere, college officials and experts across the state say it’s simply too early to tell exactly what impact Tennessee Promise will have.

But even as four-year universities could lose hundreds – if not thousands of students – and two-year colleges could be inundated, officials are in lockstep with the governor, saying they are getting ready, come what may.

Community college leaders use terms such as “deliberate” and “nimble” to describe how they’ll prepare, while university officials say their focus will be on transfers.

Students at high schools across the state have been encouraged to apply for Tennessee Promise scholarships, part of Haslam’s Drive to 55, an effort for 55 percent of adults to hold a college diploma or certificate by 2035.

Tuition and fees at Tennessee community colleges average about $4,000 annually.

“Many will attend a university, some may choose to go out of state and others may decide a different [path],” says Tennessee Board of Regents spokeswoman Monica Greppin-Watts.

“But those who do participate in the Promise will be able to find a place at one of Tennessee’s community colleges or Tennessee Colleges of Applied Technology or other eligible institutions.”

Enrollment at Board of Regent institutions, such as MTSU and the University of Memphis, peaked during the recession but dropped as the economy grew stronger, down 2.3 percent this fall.

The Board of Regents expects community colleges to “ramp back up” to serve Tennessee Promise students, after enrollment at 13 two-year colleges fell 3.9 percent this semester, Greppin-Watts says.

Before proposing the scholarship program, one of the first things the governor did was sit down with college presidents and ask if they could handle an increase in students, says Krause, the program’s executive director.

“The presidents assure us they’ve got the capacity and welcome enrollment increases, considering they’ve had enrollment contraction in the last two years,” Krause says.

“We think that 12,000 represents the state really getting an upward, positive trend on college-going (students),” Krause adds.

Haslam based his Tennessee Promise program, in part, on the need to increase the number of students who enroll in college out of high school, Krause says. 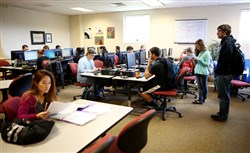 Students at Motlow State work on papers in the schools library, which had to be expanded due to expanding enrollment numbers. — Michelle Morrow | The Ledger

Pellissippi State had 4,000 students apply for the Tennessee Promise, which is a “last-dollar scholarship,” meaning it won’t be applied until all other scholarships and federal awards such as the Pell Grant are exhausted.

But Pellissippi doesn’t expect all of those to enroll at its five campuses. Its main campus is in West Knoxville, with satellite locations on Magnolia Avenue and Division Street in Knoxville, as well as Strawberry Plains and Friendsville.

Between June and August as students start to confirm enrollment, Pellissippi will have to be “vigilant,” Ashford says, in addition to “nimble and flexible.”

It will add courses where necessary and schedule them throughout the day rather than the preferred 9 a.m. to 2 p.m.

At Motlow State’s Smyrna campus, President MaryLou Apple estimates another 1,000 students could be accepted on top of its 1,900 enrollment, in part by taking advantage of a new academic building, built in 2013, even though that facility is geared toward science courses.

As numbers stabilize in the spring, Motlow will determine whether to return to a seven-day schedule and decide how many more faculty members will be needed, Apple says.

Motlow will have to make “significant” decisions early in the process to meet students’ needs, Apple says, adding “we’re positioned well for this program.”

Applicants have much to do

Southwest Community College in Memphis had 4,000 high schoolers apply, but with requirements for students to fill out FAFSA [Free Application for Federal Student Aid] papers by Feb. 1, attend Achieve meetings, consult with mentors and do community service projects, the number of Tennessee Promise students who enroll there will be much lower, says Dwayne Scott, vice president for student services and enrollment management.

“We’re hoping it will minimally exceed what we had the last two years,” he adds.

As students go through orientation from May through July, Southwest will get a better handle on the impact of Tennessee Promise, Scott notes. The college’s enrollment dipped 5.5 percent to 10,227 this fall, according to TBR figures.

Southwest will go by the Tennessee Achieve Scholarship model it uses to prepare for students, and, as classes, fill up, will hire more teachers, Scott says.

Space is not a problem, he adds, and Southwest likely will maintain class sizes of 20 or less. 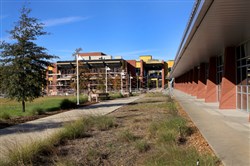 Construction continues at Nashville State. Its enrollment of 10,043 this fall barely changed from last year, but more students are expexted for next year. — Michelle Morrow | The Ledger

At Nashville State Community College, Keith Ferguson, executive director of development and public affairs, points out Tennessee Promise won’t kick in for every student because they could qualify for some other type of aid.

That includes the Hope Scholarship, which is based on grade-point average and ACT score, or Pell Grant funding, which is determined by the family’s financial status.

The Hope Scholarship pays up to $1,500 per fulltime student at two-year institutions.

“We’re not expecting it to have a significant impact on enrollment at Nashville State,” Ferguson says.

Nashville State’s enrollment of 10,043 this fall barely changed from 2013.

MTSU President Sidney McPhee lauded Gov. Haslam at a recent ribbon-cutting ceremony for the university’s $147 million science building and says he supports the Drive to 55, saying Tennessee will benefit from more people seeking a post-secondary education.

“We anticipate the Tennessee Promise will result in more Tennesseans attending and graduating out of community colleges and, as a result, more potential transfer students for MTSU,” McPhee says. “We also anticipate that as these additional students earn their four-year degrees, there will be more who will be interested in taking the next step and pursuing graduate degrees.”

In the wake of Hope Scholarship reductions for college freshmen and sophomores at four-year institutions in order to pay for Tennessee Promise, MTSU is set to offer scholarships starting next fall to make up for those $500 cuts.

Those scholarship dollars will fill a “gap” and provide incentive for students to remain in school and move toward graduation, according to McPhee.

With Tennessee’s higher education funding formula shifting from sheer number of students to an emphasis on retention and graduation rates, MTSU launched its Quest for Student Success in fall 2013, a series of academic course redesigns, improved advising and student data tracking to help students stay in school and graduate on time.

“Like many other institutions, MTSU’s enrollment is challenged by rising tuition costs and a declining population of high school seniors in Tennessee,” McPhee says.

He points out that the Western Interstate Commission for Higher Education predicted a decline in Tennessee high school graduating classes between 2012-13 and 2015-16.

“I want our university to focus not only on bringing in new students, but also keeping and graduating those who have invested with us,” McPhee explains.

MTSU went on a massive building program during the 1990s and 2000s as enrollment increased nearly every year. But McPhee isn’t concerned that classrooms will be left empty if the Tennessee Promise diverts students to community colleges.

The campus experienced such “explosive” growth over the last 15 years that, even with recent enrollment declines, the university is “finally catching up” to the point it should have been years ago in terms of facilities and classroom space, McPhee says.

Considering Tennessee has one of the nation’s lowest rates for students pursuing post-secondary education, any initiative designed to increase college attendance bolsters the state and helps it attract new industry, McPhee adds.

UTK makes it easier to transfer

At the University of Tennessee-Knoxville, officials aren’t anticipating the Tennessee Promise having a significant impact on enrollment, though they do recognize some students will take advantage of the financial benefits.

“More of our students are graduating on time and that gives us the capacity to accept more students,” Cheek explains. “By improving our efficiency and expanding our capacity, we are helping the state increase the number of college-education students – a key goal in the state’s ‘Drive to 55’ effort.”

Even so, with Tennessee Promise on the horizon, UT is focusing more efforts on making it easier for students to transfer to Knoxville.

For students who enroll at UT as freshmen, the university has merit- and need-based scholarships to help offset costs, and through a new Volunteer Scholarship program, it is investing more scholarship dollars.

Chancellor’s Honors and Volunteer scholarship, when combined with the Hope Scholarship, can cover the cost of attendance for most “academically accomplished” students, officials say.

University of Memphis Director of Admissions Steve McKellips is like most other officials in that he doesn’t know exactly what to expect, but says Tennessee Promise will provide a “great opportunity” for students who might not have gone for it previously.

“The program is so well structured we may lose some freshmen but will pick up some transfers,” McKellips says.

Memphis will be happy to accept the students who go to a two-year college and then transfer later one, he says, noting, “We just think there’s enough students out there that anybody can be successful.”

A chemical engineer technology associate degree is offered at APSU, along with engineering technology, liberal arts and management technology at Peay’s Fort Campbell campus, and liberal arts in an online degree program.

The President’s Community College Graduate Scholarship, also referred to as the Austin Peay Promise, awards students who maintain at least a 3.0 GPA when they graduate from community college and meet APSU admission requirements, Persinger notes.

“That will become a major factor,” Persinger says, as students earn an associate degree and plan to enroll at Austin Peay for a bachelor’s.

Keeping The Promise
AT&T & Drive to 55